The Old City is located at the heart of everything – or, as ancients would say, in the navel of the world – where it all started. And happily for us, where it (life!) is still going on today, and going on strong!

Though it can be rightly claimed that the Old City is the embodiment of antiquity, at this point in time, it’s a mere ten-minute walk to modernity and many of the most enjoyable activities and events Jerusalem has to offer.

Theater, cinema, restaurants, galleries, concerts, and more are all close either by foot or just a short ride away. Many of “new” Jerusalem’s cultural events take place downtown or quite nearby, and are easily accessible after a day of touring in the Old City.

After touring, though, some visitors may just want to continue walking around, soaking up more of the Old City’s atmosphere and “holy air” hearing, as they go along, the heady mix of church bells and muezzin calls to prayer echoing off the massive stone walls. Then, leaving the ancient behind via one of the city gates, they may stroll into the new city. Stopping into one of the many cafés, located all over the new city, for a revitalizing “hafukh” coffee and some pastry will provide a great break, not to mention lots of interest for people-watchers.

The Hanake street in the old city, all surrounded by walls, is one of the most important street in the center of the city. Every now and then, we will post short stories for our beloved tourists about attractive places to see in the Old City of Jerusalem. This time we decided to highlight a story about something we liked and thought you – the tourist might like it too. Pictures unique will accompany this short story to this location and time. We will start on the Hanake Street.

The 8th Station – Via Dolorosa 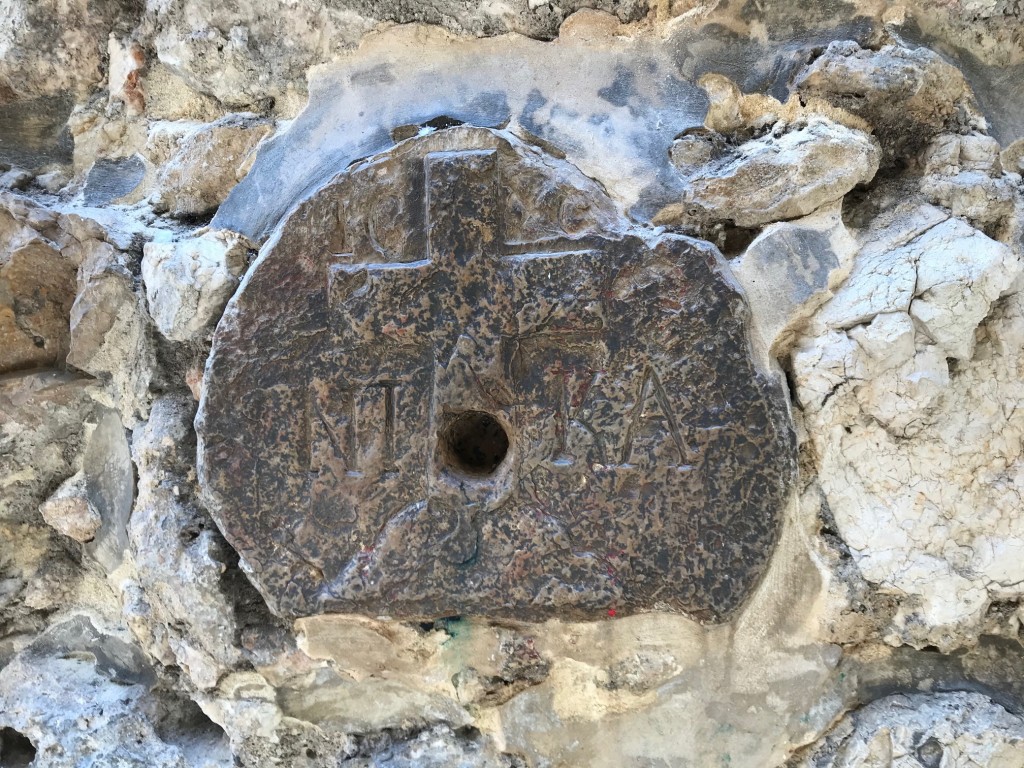 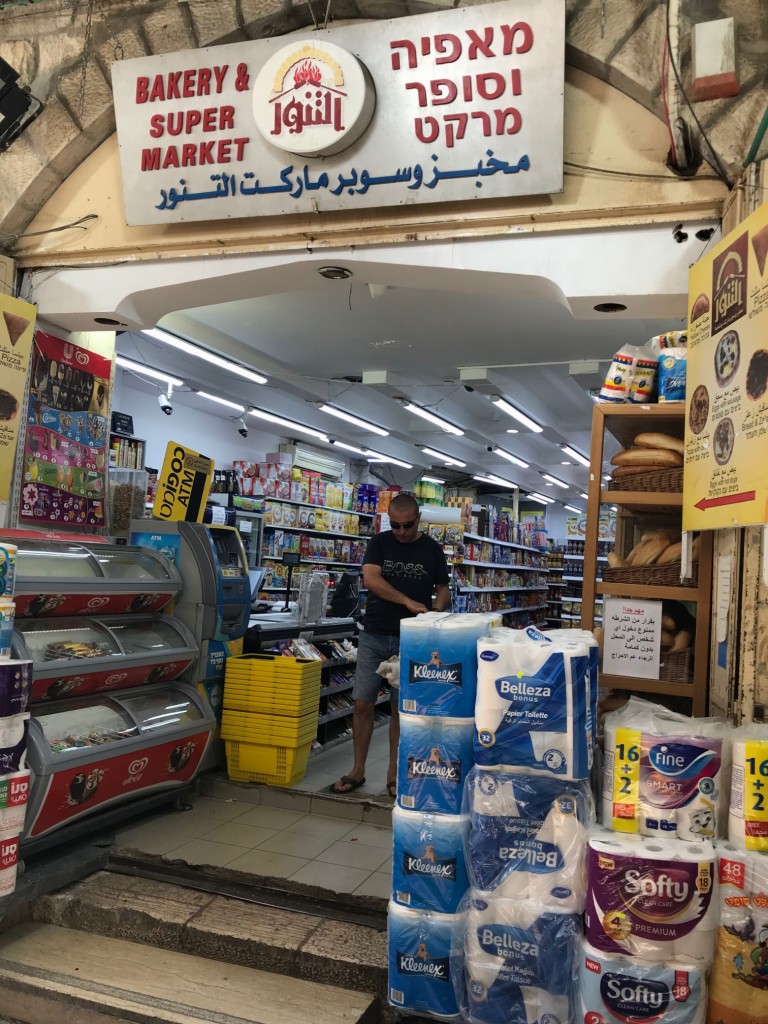 The Hanake street links many different people showing off their customs and cultures: from Christians to Muslim Arabs, Coptic, Armenians, and Ethiopian, Jews as well, all having their respective shops side by side.

A bit reminiscent of the Latin Quarter in Paris; Emek Refaim Street in Jerusalem and Sheinkin Street in Tel Aviv and so on. Look at the accompanying images and judge for yourself. 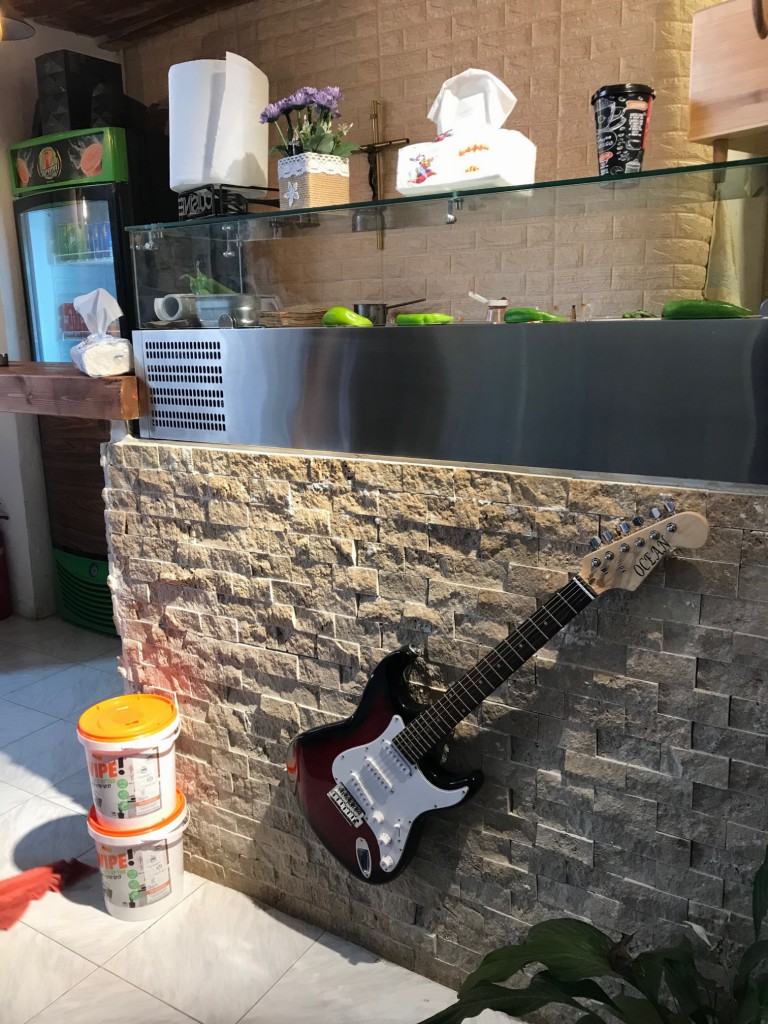 Many shops are packed tightly along the 100 meter of Hanake Street including:  women’s literature, three excellent food minimarkets with delicatessen, with a gorgeous colorful shisha shop, the hummus restaurant where you can grab excellent hummus plates as snacks to energize you for the rest of your exploration tour.

In the old City, you will discover a long list of realities that will amaze you. Next time, we will post a short story about the recently constructed and to be opened soon Ethiopian Museum. 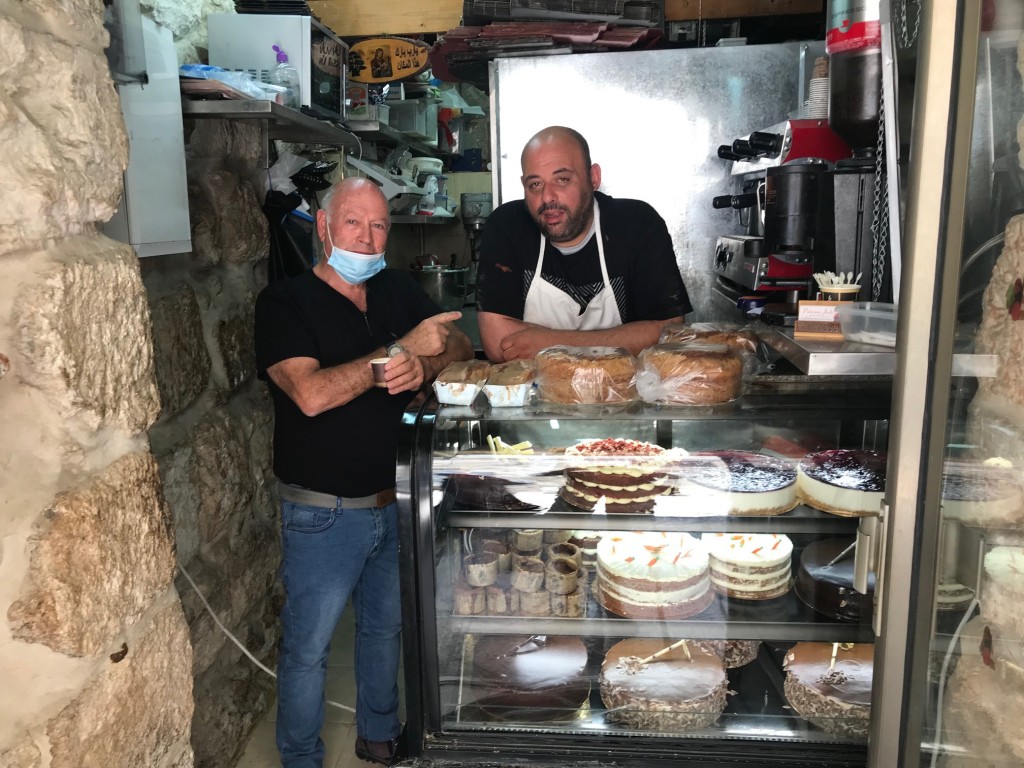 Today’s pictures depict my smiley, 46 years old friend Jack the Baker of 23 years, who bakes amazing Carrot cakes, Groom Wedding cakes and more. Jack’s baked goods are so delicious that they will melt in your mouth.

Jack spent a whole year of study how to bake at the Hadassah College, Jerusalem.

Come to taste the chocolate mousse and sip the espresso he prepares for friends.

Get a touch of Italy and Paris in this unique street of the Old City of Jerusalem. 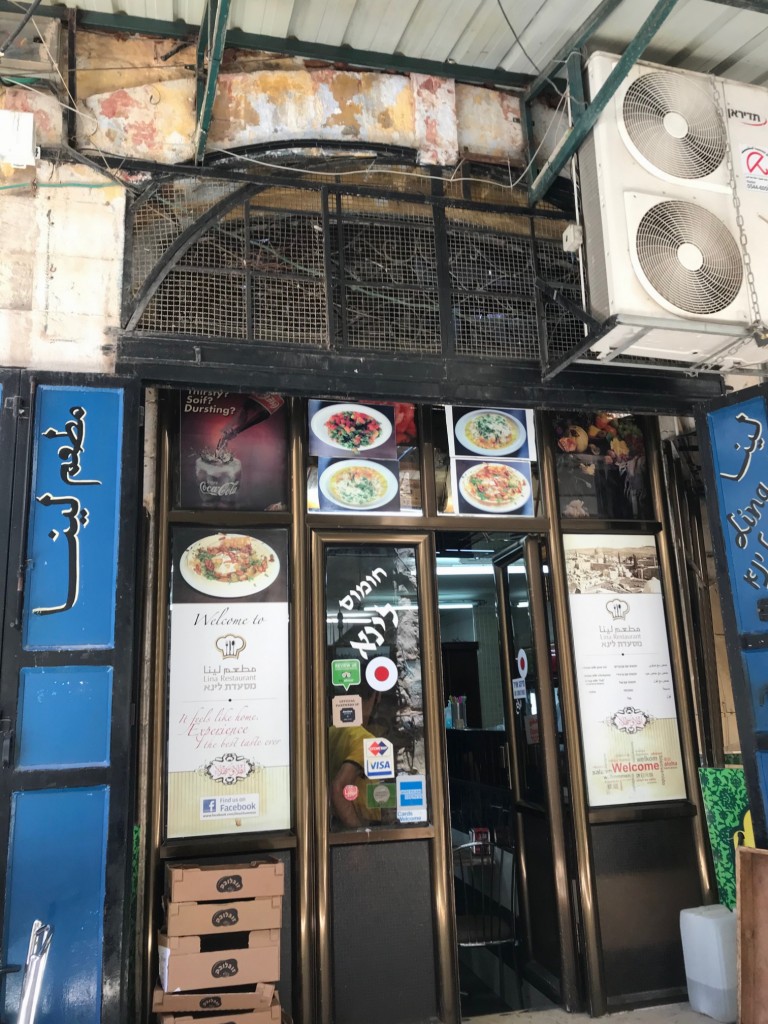 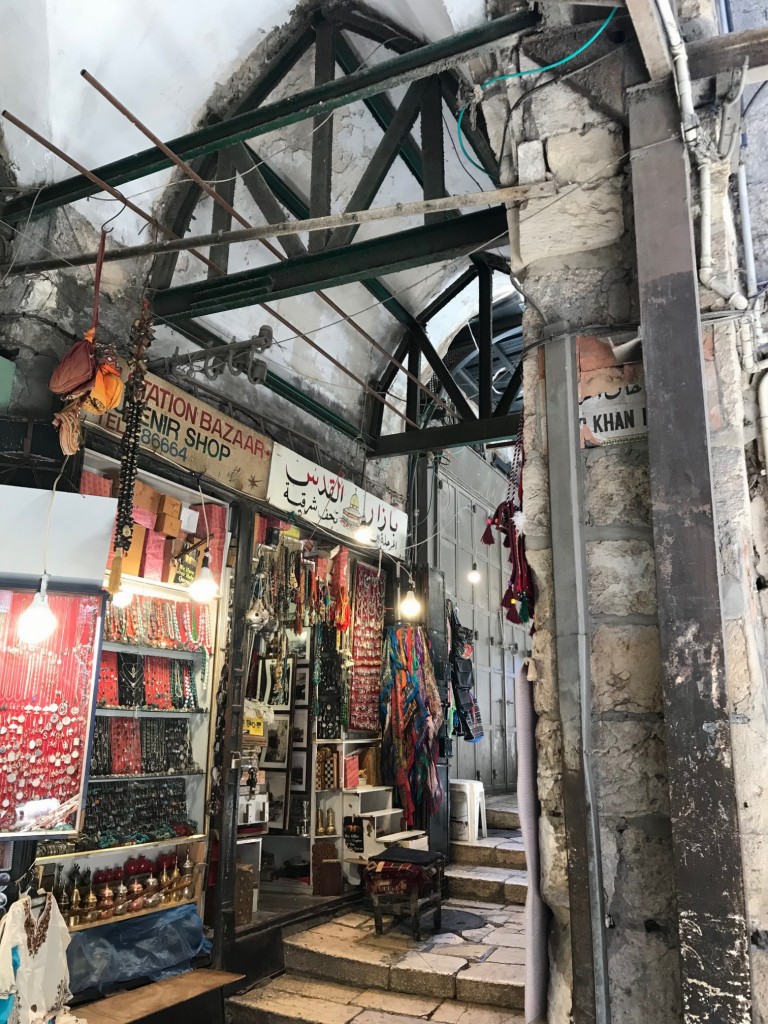 Your insider local Journalist in the Old City of Jerusalem

A totally customized, diverse and different tour in the Old City of Jerusalem – the ‘most Mysterious City of the world’.

Meet the people on the street: residents, vendors, community leaders – after living inside the Old City for over 45 years, I know them all and many are my friends.

Have a broad understanding of the situation around and inside the walls.

Visit places up and down inside the walls and also all around the walls.

Listen to the music, smell the fragrance and scent of the holiness of the city.

Treat yourself to a new pair of beautiful eyeglass with stylish frames at Adranly Clinical Optometrists with their friendly manager Bassem and helpers Achmed and Rim.

Go through the Meat Market, smile to Abu Haiman the Butcher.

All with me – Journalist and resident Amnon Shiloni

–  No more than 5 people max in a tour group

– Tours are scheduled only one tour per week

– Make your tour reservation in advance

Guide to the Old City, web site system had decided to make a documentation of two new, old subjects.

The Old yards in the city from the 19 century, who served the pilgrims that came from all over the world to the Holy Land to meet the spirit of the Holiness of the Jesus’s steps.

Here are some of them in a short while we will bring more pictures as well if any one of our readers would like to send picture that he had taken while visiting here we will love to add it .

Pilgrims Yards in the Old City 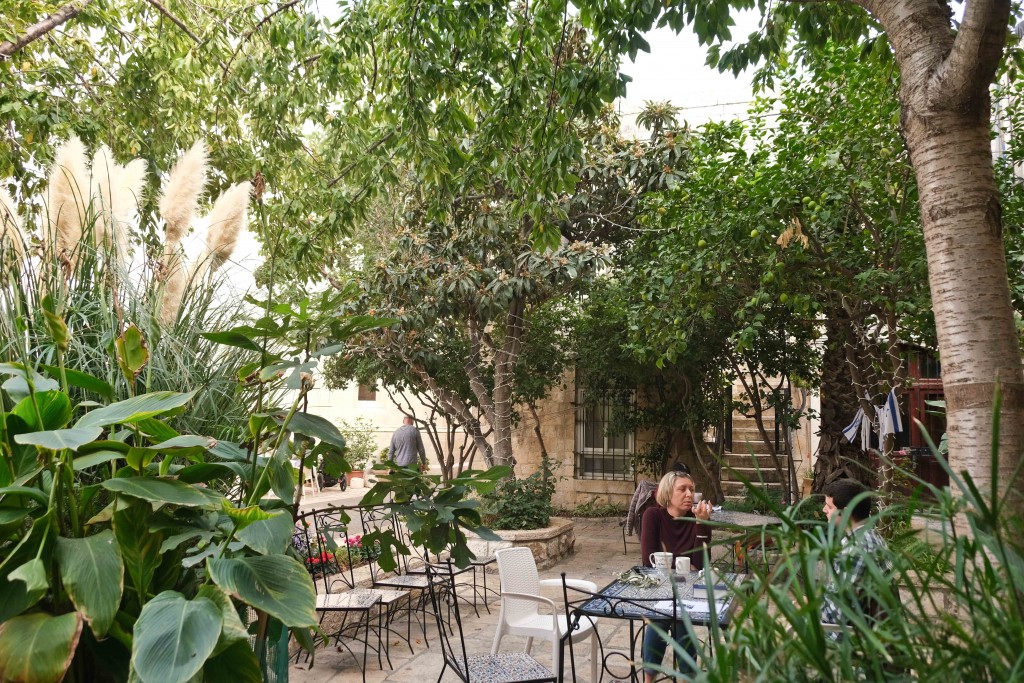 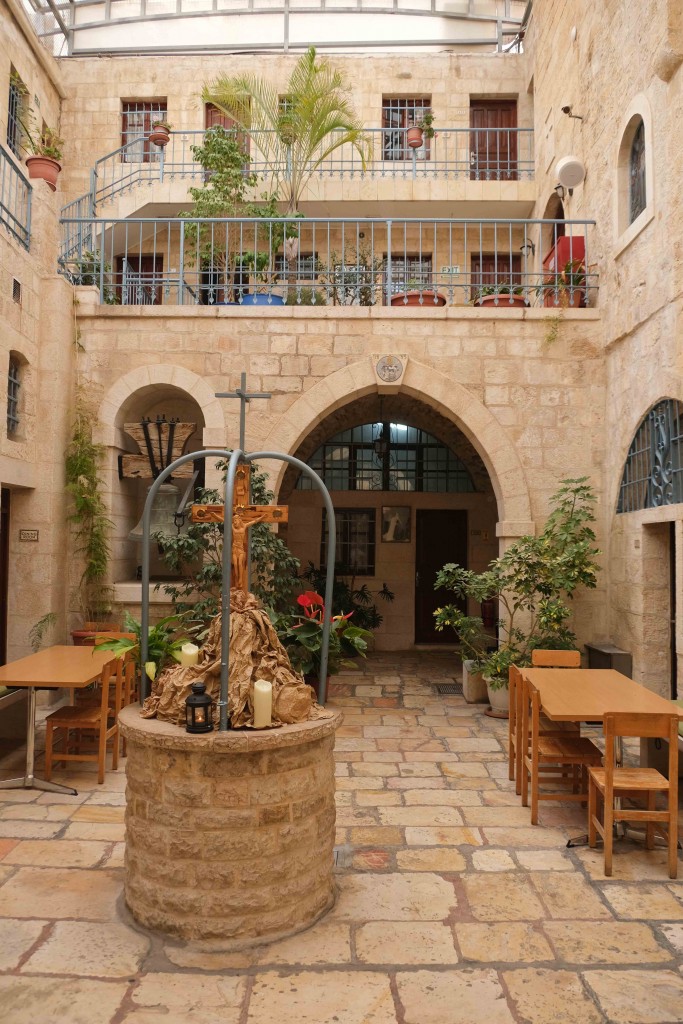 Church of the Redeemer Cafe 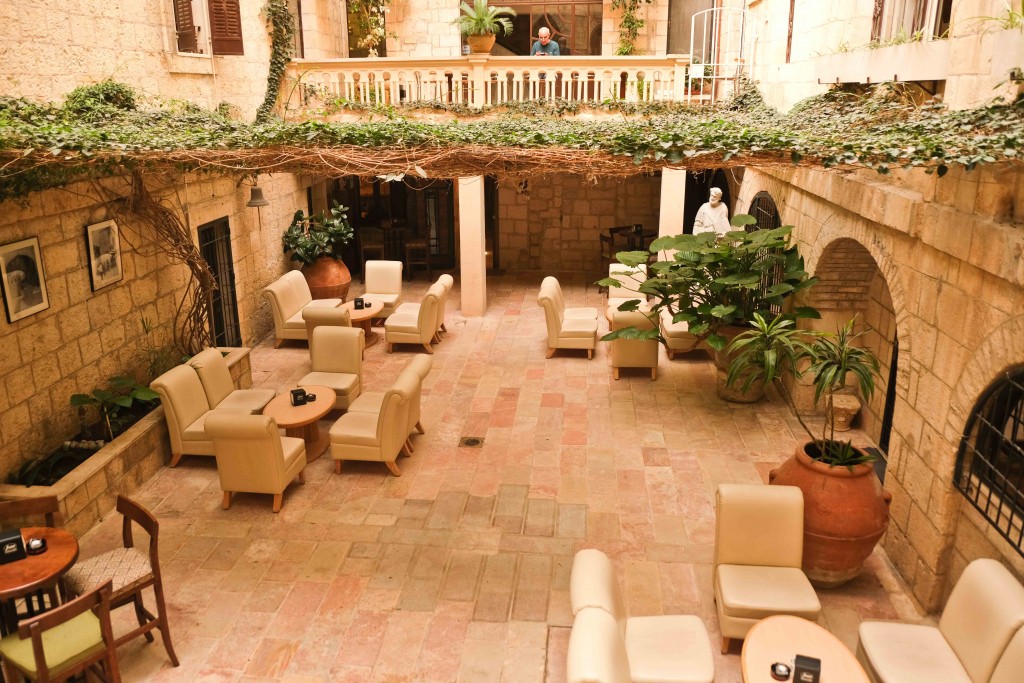 all Pictures by Giald Puny, Photographer

How to Disappear Completely,  Oren Eliav’s first solo exhibition in the Israel Museum is a fascinating artistic journey in the footsteps of a small and strange 15th-century painting, hanging in the core of the exhibition. “The painting hit me like a white billiard ball that smashes into the other balls,” says Eliav. “The exhibition is the result of a ‘head on collision’ between the original painter and myself.”

The painting The Death of Lucretia which was on permanent display in the European art galleries at the Israel Museum, sparked the imagination of Oren Eliav, a prominent Israeli artist.

The small painting, attributed to 15th-century Italian painter Giovanni di Paolo, depicts a tragic scene in which Lucretia, a Roman nobleman’s wife, summons her husband, her father and their friends to inform them that the son of Rome’s tyrannical ruler had raped her – and then proceeds to kill herself. According to the Roman historian Livy, who wrote the story in the painting, Lucretia makes them swear that they avenge her death and indeed, they fulfill her wish. They topple the regime, exile the royal family, and establish the first republic in Rome.

In his exhibition, Eliav deconstructs the original painting in an unusual way.  The 20 large-format paintings focus on different sections of Di Paolo’s painting; each representing a different perspective of the event – distorting the proportions, the angles, or changing the color.

The Israel Museum is the largest cultural institution in the State of Israel
and is ranked among the world’s leading art and archaeology museums.

The Jerusalem Print Workshop is an art center dedicated
to the advancement of printmaking.

The Cardo is an impressive colonnaded-style street in the Jewish Quarter in the Old City of Jerusalem.

Following the Bar Kochba Revolt (in the 130s AD), the Romans built a new city, Aelia Capitolina, in the place of Jerusalem. They divided the city into four quarters by building two large perpendicular streets that intersected in the middle. The main street running north to south was the Cardo Maximus. It was a 22 meter wide road with large columns on either side.

The Cardo lead to the Christian Roman city and the commercial center of the town. It started at what is today Damascus Gate in the north and reached today’s Zion Gate. It was discovered in archaeological excavations after 1967.

The northern section – from Damascus Gate to David Street, dates back to the Roman Period.  From that point, through the western side of the Jewish Quarter, is a section built during the Byzantine period, in the 6th century CE.

The paving stones are the originals, dating back to the Byzantine Period. Nowadays, in addition to archaeological remnants, the Cardo is lined with galleries, souvenir, Judaica and other tourist-oriented shops.